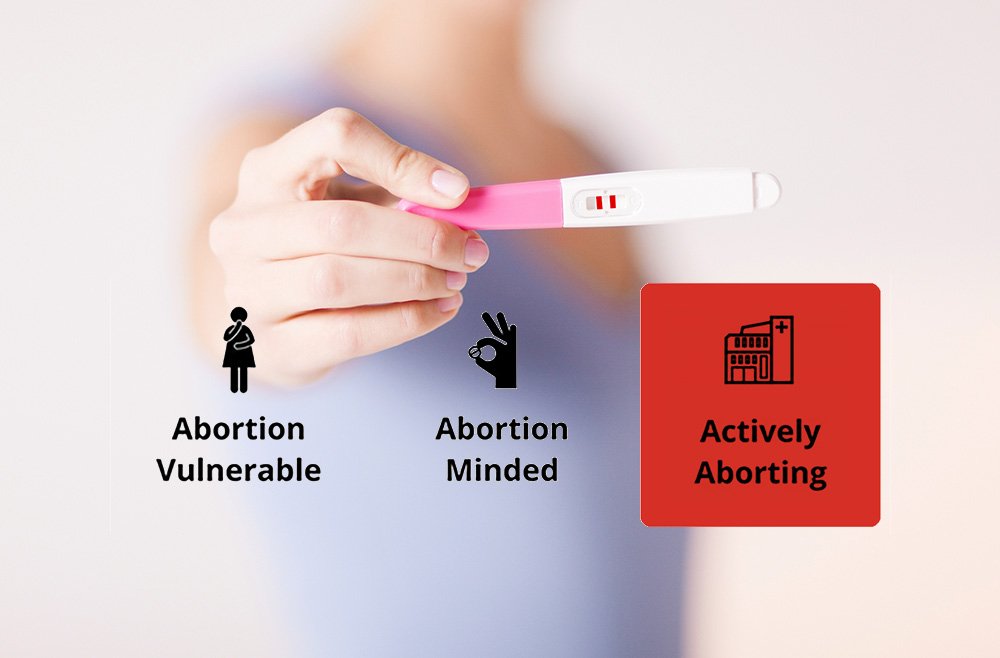 If you do not understand these different categories of mothers, you will misunderstand ten basic things about ministry to aborting mothers.

1) You will think Pregnancy Centers and sonogram buses are talking about actively-aborting mothers (the category in red) when they mention their “8 out of 10 saves.” (They are talking more about mothers in the categories toward the far left — saves from POTENTIAL abortions usually. The mothers who come to them are different than actively aborting mothers by very nature of the fact that they are willing to walk through the doors of a pro-life organization seeking out help.)

2) You will think the strategy of those who, by and large, minister to the abortion-VULNERABLE is the same suitable strategy for ministering to the category in red.

4) You will mistakenly think that when there is a “save” by someone ministering to the abortion-vulnerable that that was a save from an actively aborting mother.

5) You will listen to those who minister to the abortion-vulnerable category on the left (ex. pregnancy centers like Care Net, Heartbeat International, Human Coalition, Save the Storks, etc.) as an “authority” for ministry to the people group circled in red, instead of listening to those who actually minister to the actively-aborting.

6) You will think a “save” from the abortion-vulnerable category is one less DEFINITE abortion this year from the babies put to death on American soil.

8) You will think we’re winning. After all, if you believe that aborting mothers go through pregnancy centers and sonogram buses and 8 out of 10 choose life, then that does indeed sound like we’re winning and have a successful strategy. (Hint: we’re not and we don’t).

9) Because you think we’re winning with current strategy, you will write a check to those ministries ministering to the abortion-vulnerable and ignore genuinely righteous legislation to abolish abortion, criminalizing it outright.

10) You will see no need for Godly laws of abortion abolition that would subject the mothers to prosecution (going forward) for breaking said laws. After all, if the pregnancy centers and sono buses are saving 8 out of 10 babies, then why fix something that ain’t broke? The truth of the matter is that actively aborting mothers have little interest in our beautiful pregnancy centers and sono buses. The only thing that will restrain their violence against their sons and daughters is the same thing that restrains crime of all kinds: Godly laws with just punishments for breaking said laws.

**There is overlap between the various categories of mothers. Mothers sometimes shift from category to category. At some point, most in the pro-life movement will see mothers from all three categories, but they will PREDOMINANTLY be ministering to usually either the far left or far right.