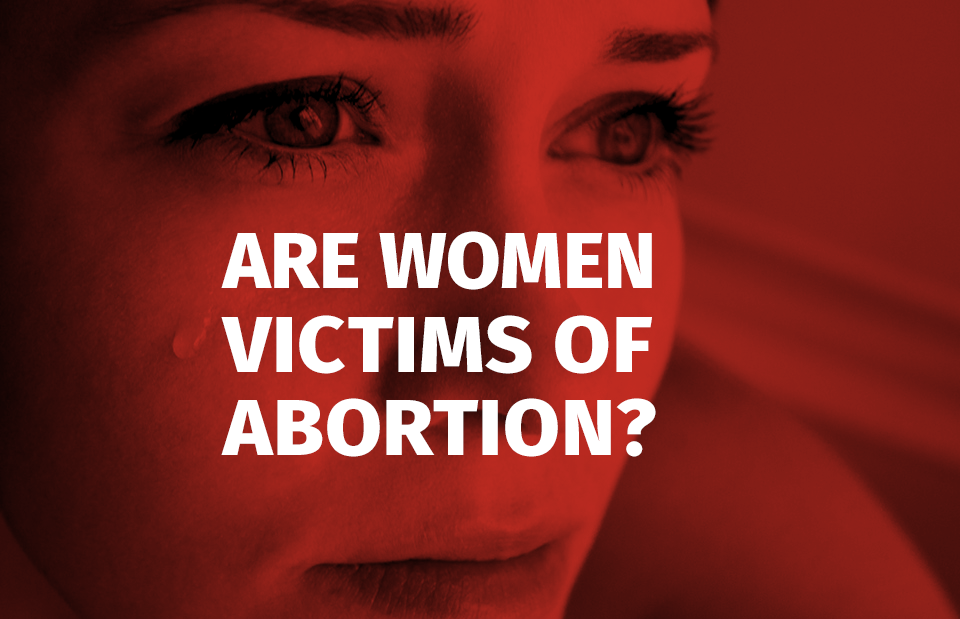 What are we talking about?

We built an entire website to debunk it, but what do we mean when we talk about the pro-life second-victim narrative?

We are talking about the victim persona given to nearly all actively aborting mothers by most pro-life organizations and ministries.

We are talking about the notion that most women who get abortions are victims of abortion.

We are talking about the “One dead, one wounded” narrative that is so prevalent in pro-life circles.

Examples of the second-victim narrative in action:

Nearly every major pro-life organization or ministry in existence today utilizes the victim persona for aborting mothers. This narrative is all over their social media, emails, and websites:

Why are we talking about it?

We didn’t go to the trouble to put this site together because we want to be mean to women or nasty to pro-life organizations who are trying to help women. Please, please, hear us, that is not why we are here.

The reason the second-victim narrative must be debunked is that this false narrative (please stick with us, let us prove it to you) is one of the MAJOR roadblocks to establishing justice for pre-born human beings in America today.

The second-victim narrative has trained pro-life Americans (including legislators) to dismiss outright any and all legislation which would establish equal protection and equal justice for pre-born babies.

Most high-profile pro-life leaders actively argue against any legislation that would allow women to be punished in any way for the part they play in the abortion of their children.

Abby Johnson, Planned Parenthood director turned pro-life advocate, publicly says she would never support a bill which treats the murder of an unborn person in a way equal to the murder of a born person:

President Trump, while on the campaign trail in 2016 said that if abortion were illegal and a woman broke the law and procured an abortion, she should “receive some form of punishment.” Pro-life leaders couldn’t issue their statements disagreeing with this position fast enough.

Trump quickly retracted his statement, which clearly demonstrated how the pro-life second-victim narrative actively retrains the minds of public officials toward injustice rather than persuading them toward equal protection, equal justice.

This isn’t about maliciously prosecuting only women. It is about giving pre-born babies the same protection that born people enjoy. Just laws prosecute anyone who participates in the unjust taking of an innocent life: accomplices, co-conspirators, hired killers, etc. Bills of abolition don’t single out women for prosecution but they do include women who willfully take part in killing their own pre-born children.

See an example of this from legislator Jeff Leach in Texas as he explains that he will work to kill bills of abolition which would allow for women to be prosecuted:

Because of this narrative, our pro-life laws write broad exceptions directly into them that woman who get abortions (even when they are in violation of established law) may not be prosecuted. Our pro-life laws proactively withhold justice from pre-born children whose mothers willfully participate in killing them.

Does the second-victim narrative hold up?

This site contains page after page of screenshots, videos, and photos which backup our position that the vast majority of women who get abortions in America today are not victims.

In closing, we will let women speak for themselves…

The following screenshots are taken from online conversations with actively aborting women or from public posts in online pro-abort support groups. These are women who gather online to support each other before, during, and after their abortions. They answer each other’s questions and cheer each other on. These women generally do not come to pro-life ministries looking for help, nor do they want it. Please listen to what they are saying.

Are most women being coerced or forced into their abortions?

Are women ignorant that they are carrying a baby?

Women are overwhelmingly painted as ignorant victims who don’t understand their own actions.

While we agree that abortion is never good for women, many women sure don’t see it that way. Often aborting mothers feel very empowered by their decisions to abort. We see this in campaigns like the #ShoutYourAbortion movement, as well as in public posts online like this one:

Women feel so empowered by abortion they often dance in the clinic parking lot while waiting for appointments for themselves or their friends:

This is overwhelming, what do we do about all this?

Browse more of this website and ask yourself these questions:

Start being a voice for the voiceless

Join the growing movement of people (we call ourselves abolitionists) who have come to understand that regulating abortion as healthcare will never bring about justice. Learn to use your voice to speak up for the voiceless by calling for equal protection and equal justice for pre-born human beings, without exception and without compromise.