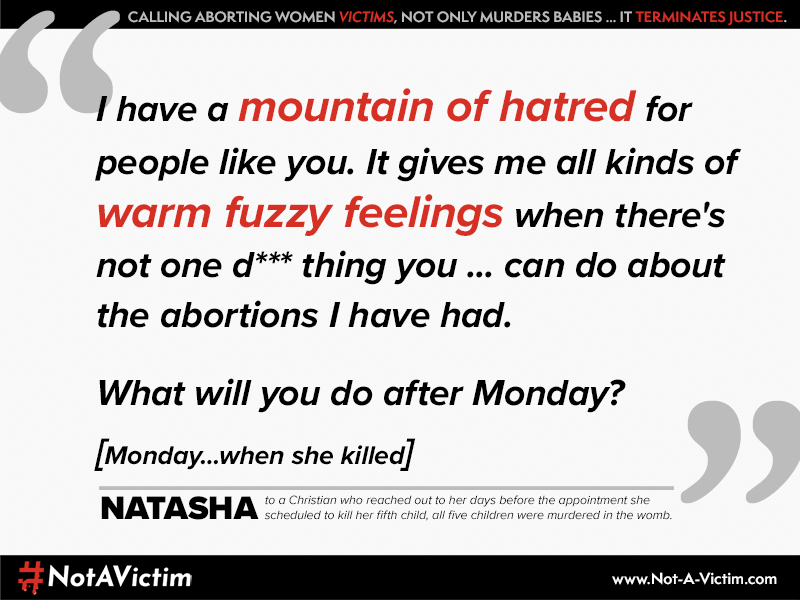 I have a mountain of hatred for people like you. It gives me all kinds of warm fuzzy feelings when there’s not one **** thing you or any other anti can do about the abortions I have had.
What will you do after Monday [when I kill]?

Natasha, days before she murdered her 5th child by abortion

** I read Natasha’s words after many days of offering her encouragement, resources, and support in doing the right thing: being a good mommy to her little boy or girl. She only mocked me and her baby in response — saying horrific things about how much she loved killing kids. I then responded with the following firm rebuke:

What will I do after Monday?
That’s an interesting question.
I think I’d rather tell you what I’ll do ON Monday.

I suppose I’ll wake up a couple of times in the wee hours of Monday morning when it’s still pitch black outside, checking to see if you’ve written with a change of heart. With the heart of stone you’ve presented in your emails so far, I won’t expect much of anything, but I’ll check anyway just in case there’s any way I can help you through your pregnancy.

I’ll send you an email, I suppose, asking if you’ve named your baby pre-kill as lots of aborting moms do.
If not, I’ll name him/her myself (as every baby deserves a name).

I’ll get up.
Make breakfast for my kids.
Clean the house.
Read a history book to my littles.
Help my 4 year old learn to write her name.
And somewhere in there, mention to my husband and any friends I talk to that it’s killing day for a mama I’ve been emailing.
Baby #5, if she wasn’t just saying that for shock value.

I’ll probably ask you what time your appointment is.

And then wonder, as I watch the clock, what time zone you’re in and if you’ve already slaughtered or if your baby still thinks it’s just another normal day snuggled up in the womb, safe and sound.

When the clock does change to your appointment time,
I’ll imagine your name being called to the back.
I will envision you forking over your hundreds to pay the hit man,
Signing the papers to orphan your kid off,
and climbing on the table — holding still, while a madman has at your child with his surgical tools…several minutes of sheer terror for a defenseless infant. A gun to the head would be more merciful.

I’ll marvel at how you’re not taking care of “your” body, as you said, (for you don’t have 4 arms, 4 legs, 2 brains, 2 hearts, and if your baby’s a boy, you’re not double-gendered), but how you’re rather “taking care of” the body of your infant against his/her will. So much for “my body; my choice,” I will think.

Meanwhile,
I’ll make lunch.
Put a couple kids down for naps.
And wait for your victory post talking about how it went better than you imagined —
better than the times you killed by poisoning —
and how you’re home resting, sipping tea, cuddled under the blankets,
while your baby’s stuffed in the freezer, awaiting medical waste transport to the incinerator.
His/her blood flowing from your body.

Somewhere in there,
I will marvel that there’s — yet again — another mama who has refused adoption for her little one…
adoption that would have been free for her as the birth mom.
That she would have rather paid her hundreds to the hit man in the white coat
than give her baby up to a sweet couple who have been praying for a baby they can’t have.
Same story every time:
“Because I’d have to carry the baby for 7 more months”
or
“I don’t want to get ‘fat.'”

I’ll marvel that we never even talked about helping you with your material needs for your little one — because you were too into explaining how excited you get about dead babies, how you were going to “flaunt” your abortion, and how it gives you “warm fuzzies” to kill in the face of any “pro-lifers” gently challenging you to not abuse your baby this time.

Then, I’ll end the evening — the date of death for your baby who I will call by name — by worrying about you.

Worrying about the next few babies you will intentionally create only to destroy.
Worrying about your greater compassion for cows and rabbits, than this child who looks a little like you and a little like your boyfriend. Your mini-me. I’ll worry about you — like a mom for a daughter — for your eternal destiny as one who hasn’t figured things out spiritually and whose heart has grown dead to the most basic of moral standards.

I’ll marvel yet again that we’ve even been having this conversation — debating why it’s wrong to poison your babies (like slipping a little arsenic in a baby’s bottle).
Or vacuum them up like dirt.
Or dismember them alive.
Or forcibly birth them into a toilet half full of water.
Why that’s considered a “right”
and why abortion is considered — in your own words — an “art”…
“sticking a baby in a blender”…
why killing is “pretty **** fabulous.”

And then I’ll head to bed.

Well, I’ll probably stop to rant first on Facebook to some Republicans somewhere about how ridiculous it is to say you all are victims and don’t know what you’re doing. And some well-meaning soul out there will respond by saying something, implying it’s my fault you killed — that if I were just nice enough, gentle enough, provided enough resources, told you about free sonograms or Pregnancy Help Centers or adoption…
that you wouldn’t have done it.

And then I’ll nurse my baby and head to bed — another killing day over and done with.
Another infant dead.

That is what I will do on Monday, Natasha.